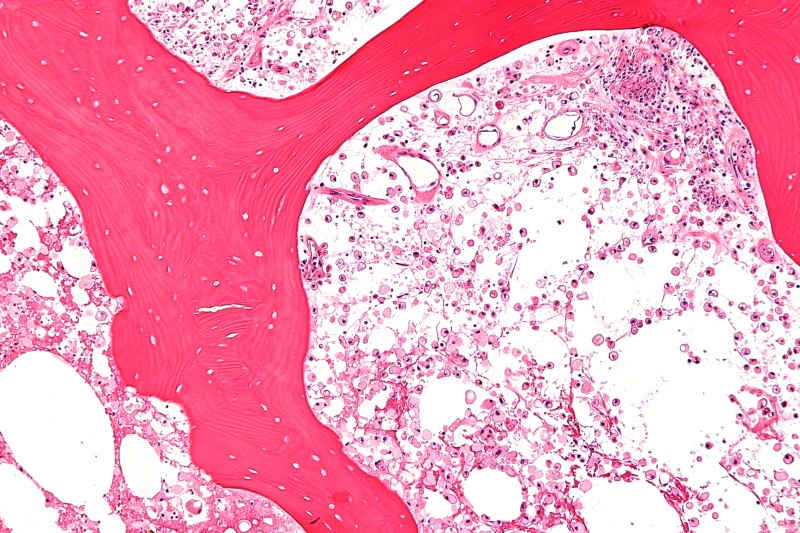 Symptoms and treatment of the illness of gaucher

The illness of Gaucher (EG) is part of the list of slightly Frequent Illnesses (EPoF) or rare that affect a limited number of persons, with a low or equal predominance to 1 of every 2.000 inhabitants.

In fact, the Gaucher illness, it affects in the world approximately 35.000 persons. Between its main symptoms they emphasize the enlargement of the liver and of the spleen, as well as the anemia. Although in some cases also it can go so far as to affect the brain and the nervous system.

This owes to the accumulation of the cells of Gaucher: why does this happen? Above glucocerebrosidasa is the manager of preventing these greasy deposits from being accumulated in our body (cells of Gaucher), but when the organism cannot metabolize them for not having enough encimas, they accumulate in different parts of the body, principally the liver, the spleen, the bones and the bone marrow.

The Gaucher illness is not tied to the sex, and its signs and symptoms can be evident in the patients affected at any age:

-Tendency to the haematomas formation

-Enlargement of the spleen

-Enlargement of the liver

-Fatigue Problems with the cardiac valves

-Pulmonary illness Convulsions Distension serious (edema) on having been born

This illness is inherited, children are transmitted from parents, caused by genes mutants or defective, by which so that it takes place they have to be 2 carrying parents.

In the opinion of the Dra. Susana Meschengieser, Chief of the Department of Hemostasia and Thrombosis of the Institute of Investigations Hematológicas of the National Academy of Medicine Argentina, “the Gaucher illness is usually diagnosed in the infancy and the consultation motives are usually the descent of thrombocytes and the pathological enlargement of the spleen.

Exceptionally the diagnosis is done in adult age, and in these cases symptoms are detected usually for the same and before the presence of anemias”.

The Gaucher illness classifies under three tipos:En dependence on the presence, or absence of neurological affectation and its gravity:

– The type 1, not neuropático, compatible with a long survival, is the most frequent and, in him, disorders of the nervous system do not exist.

– The type 2, the neurological affectation is extraordinarily serious and precocious and it unleashes the death of the fond children before two years of life.

– The type 3, interval between both, combines the visceral affectation, with precocious, but less serious neurological disorders.

The most frequent form is named type 1 extraordinarily heterogeneous in its presentation and evolution, since cases are diagnosed from the early childhood up to very advanced ages. When symptomatology takes place, this one depends on the blood citopenias for mieloptisis, or I kidnap esplénico, or of the bony, sometimes serious inconveniences. The asymptomatic cases are not rare.

The diagnosis is based on the clinical information, it is necessary to bear in mind the following thing:

– The find of cells of Gaucher in bone marrow

– The study mutacional of the gene GBA The genetic study allows the genetic advice and prenatal diagnosis, if it is needed.

The Dra. Meschengieser insists on a rapid diagnosis, “If the diagnosis delays the quality of life it deteriorates, there is fatigue and disorders of feeding; even in the children it can produce delay in the growth”, points the expert.

Treatment of the illness of Gaucher In case of the EG of type 1, two effective treatments exist. The first one substitutes the deficient enzyme. This way, all the lípidos are metabolized appropriately and the injuries become reversible. A patient affected by this pathology must be present every two months at medical review and every two weeks for its enzyme.

The second treatment would be the therapy of reduction of substratum, which consists of the pharmacological glucocerebrósido sintetasa inhibition, to reduce the glucocerebrósido synthesis. According to the clinical form of every patient and its tolerance, there is administered one or another treatment as clinical criterion. The forms neuronopáticas sharp (type 2) do not answer to these treatments, but in those of type 3, any more light ones, some patients can benefit from the replacement therapy enzimática.

The Gaucher illness is a multisystemic metabolic disorder, which bears serious consequences for the one who endures it. The precocious diagnosis and treatment improve the prognosis of the illness and the quality of life of some patients.