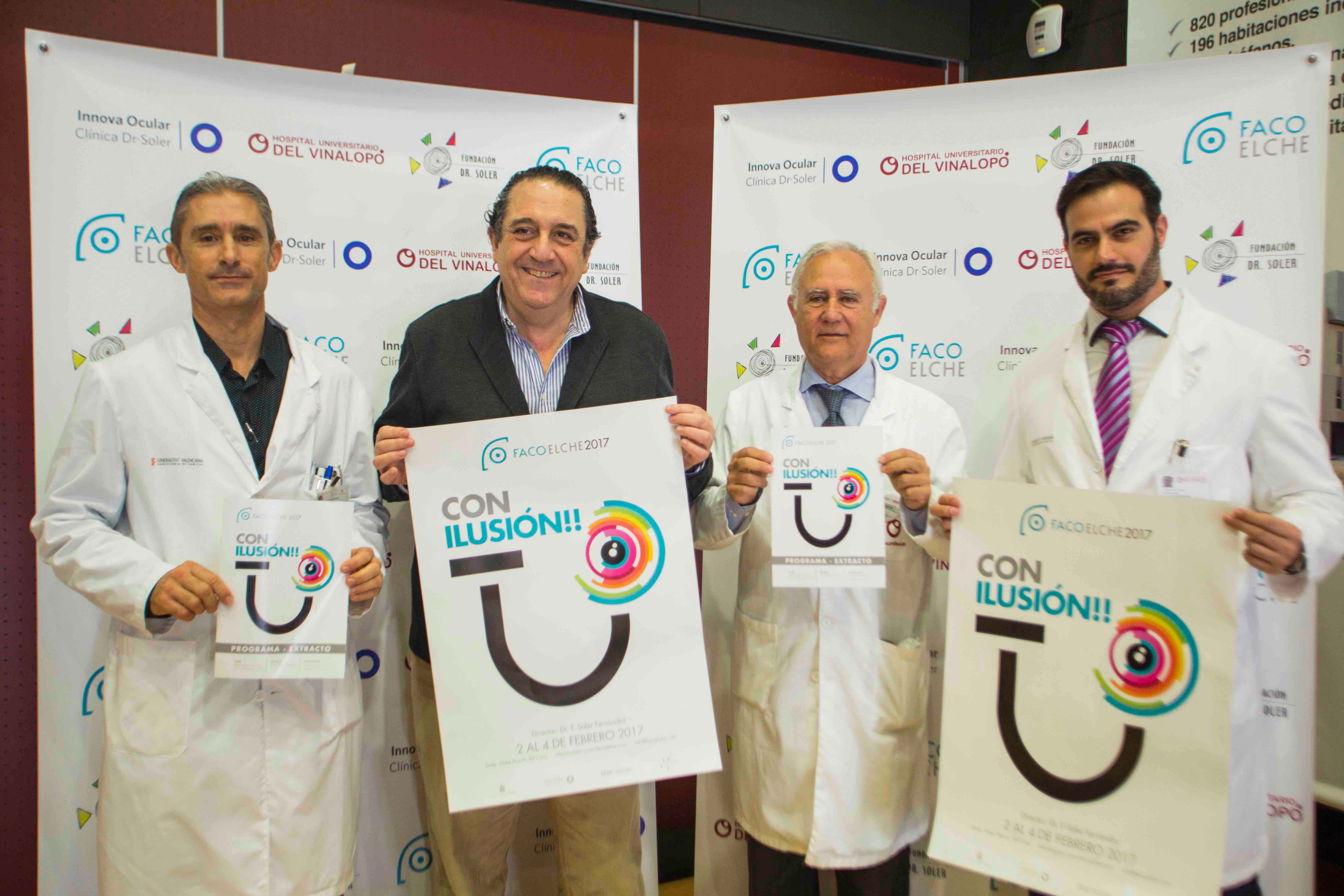 FacoElche 2017 will show the first scientific results on the color change of the artificial iris and cornea.
Dr. Fernando Soler heads the nineteenth edition of this renowned annual Ophthalmology appointment around the country’s most important private congress, which marks the latest trends and innovations applied to facelift surgery.

FacoElche 2017 under the title: “Con Ilusión!” Has as a novelty, the course FacoJunior aimed at residents and young ophthalmologists, in full training.

The Hospital del Vinalopó hosted this morning the presentation of the medical scientific congress FacoElche 2017 led by Dr. Fernando Soler and will take place on 2, 3 and 4 February at the Hotel Huerto del Cura in Elche. Once again, the city of Elche is again the national epicenter of Ophthalmology, thanks to FacoElche 2017, which in this year celebrates 19 editions that consolidate this scientific-medical meeting as the first national congress of the year in the specialty of ophthalmology And also the most influential of all those celebrated in the country.

As a first novelty, this year FacoElche presents the first scientific study related to the color change of the artificial iris and cornea, which was an experimental technique, thanks to the international rapporteur Dr. Claudio Örlich.

In this sense, we will have the presence of other guests of international scientific prestige such as doctors; Juan Batlle and Eduardo Mayorga, medical authorities worldwide in their respective specialties.

In addition to this scientific innovation, FacoElche presents on Thursday, February 2 from 10 to 13 hours FacoJunior, a course aimed at residents and young ophthalmologists who are still in full training. “With this activity we try to put in value the new professionals” as stated by the director of FacoElche. Dr. Fernando L. Soler.

Likewise, in this edition the FacoElche Forum will be presented, which is the framework in the Network in which all ophthalmologists interested in eye problems of the anterior segment of the eye and in refractive surgery can interact with their colleagues to exchange knowledge.

During these days, the Hotel Huerto del Cura will host presentations, round tables, and a total of fourteen live surgeries from the Hospital del Vinalopó of medium-high complexity that will be transmitted to the central hall of the congress for those attending the event.

One of them, will be the one that stars Dr. Gonzalo Bernabéu who will operate to his progenitor also medical ophthalmologist in direct, through our cameras implanting intraocular lenses. Something unheard of in Spain.

THE ASSISTANTS GROW EVERY YEAR

This edition expects to welcome more than 1,000 vision professionals from all over the country and abroad, including Portugal, Mexico, Argentina, Costa Rica, Dominican Republic, Egypt and Colombia, among others. In the previous edition, the attendance data was broken with a total of 1004 participants. This being the natural evolution:

As usual, on the fringes of the congress on Friday, February 3, from 10:30 a.m. to 1:30 p.m., the FacoGestión course will be held: “Public management, private management and self-regulation” under the direction of Ignacio Conde, Luis Fernández and Dr. Vicente Polo.

In the afternoon from 4 pm to 8 pm, the Facoptom course will be held for the third consecutive year, for the optometric forum under the direction of Nuria Garzón, Rafael Pérez Cambrodí and Igor Illarramendi.

Once again, the most important congress of Elche in economic and social terms will again generate an economic impact on the city, which is estimated to exceed 2.2 million euros. Mainly in the sectors related to trade, catering, hospitality, public transport and creation of direct employment in companies in the tertiary sector.

In the words of the director of the medical contest, “FacoElche, with 19 years of experience and respect for the international medical community, has become, by its own merits, the most important annual congress of the province of Alicante consolidated as one of the most influential scientific meetings Of national ophthalmology, “said Dr. Fernando L. Soler.

In this edition the number of speakers rises to 107 participants, while the collaborating firms reach the figure of 39 companies .

Ophthalmologist: prevention is better than cure